The Village Hall stands on the south slope of Sancreed Beacon, sheltered from the strong westerlies, and the cold North and East winds. Surrounded by trees, the location of the hall is delightful. Inside, the wooden interior has a lovely atmosphere, many residents preferring this older, simpler hall to a modern replacement.

Alfred Olds, of Trevorrian Farm Sancreed, now 94years, remembers the wooden Hall being built in the 1930s by local builders Jack and Simon Hosking. The cost of building came from donations and the land was given by James Stevens the son of the author James Stevens. The Hall was first known as the Hut and later the Institute. It was, as it is now, for the use of everybody(information received Feb 2010)

A former Sancreed Parish resident from Catchall, Phyllis Maitland nee Corin, who attended Sancreed Village School from 1927 – 35, remembers the building as being known as the Army Hut, and later the Institute. ( information received Feb 2010)

During the Second World War Alfred Olds was in the Sancreed Home Guard that was based at the Institute. They slept at the Hall and each night two men would patrol the area. The top of the Beacon has views that extend to The Lizard, Carn Brae at Redruth/Camborne, all of Mounts Bay and around the coast almost to Land’s End. The sky could be seen glowing red from the fires when Plymouth had the blitz.

The leak in the ceiling is due to an accidental round being fired when one of the men left a round in the breech of his 303 rifle.

The institute was popular with billiards for the men – no boys allowed, and also Jethro (who attended Sancreed School) told a story of how he and friends would climb into the gap between the foundations and the wooden floor and make ghostly scary noises during the whist drives! An activity which probably had been going on for generations!

In the 1980’s, after a fire in a Village Hall up country, fire regulations made it necessary to clad the wooden building with cement, and that is how the Hall appears today.

Events are regularly organized by the Sancreed Village Hall Committee, the biggest being the annual Sancreed Pig Walk, which takes place in July to celebrate the connection with that most endearing of animals.

Host your event with us

The village hall is a great venue for events, from parties to exhibitions. If you'd like to get in touch and organise an event of your own at Sancreed Village Hall, why not get in touch? 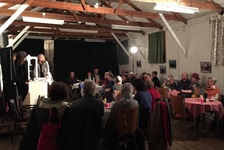